Arkham Asylum and the One Outside It

Truth is no stranger to fiction, even in Batman comics...

I recently revisited the classic graphic novel Arkham Asylum, by Grant Morrison and Dave McKean. When I first read it many years ago, I think I was nonplussed by the unconventional art and the fact that Batman wasn't kicking someone's butt every few pages. But now my tastes have matured, and I was able to appreciate the artful abilities behind the writing and visuals.

That's not to say I enjoyed the book...it's gruesome enough to make me think that Morrison's goal was not for people to enjoy it, in fact, and it's definitely not for children. (I always have to point that out, because I have a bunch of my own who might see this, and many others that may look to me for recommendations.) But for adults who want something to think about, and a closing "punchline" from the Joker that captures well a profound truth in this fiction, it's an interesting read. 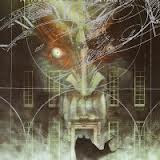 The profound truth I mentioned is what I wanted to discuss here briefly. In the plot the inmates have taken over the asylum...that's what I say when I leave my kids alone at home, but in this case we're talking real inmates and a real asylum, which is a scary thing to be sure. They demand that Batman come in to join them, or they will kill more of the staff. And then they put him through a gauntlet of challenges and suffering, some of it caused by his own insecurities, neuroses, burdens, and sins (to use an old term not mentioned in the book). As the story progresses, it also becomes apparent that not only Batman, but the staff of Arkham, who are supposed to be helping their "patients" to become more sane, are struggling with their own versions of insanity.

I will resist the temptation here to expound on the idea (intentionally communicated by Morrison?) that much of the cure for mental illness is worse than the disease, and often makes it worse. But I wanted to focus on the simple truth that the Joker points out in his final line in the book, when he says goodbye to Batman when the caped crusader is leaving the building. The clown prince of crime says, "Enjoy yourself out there...in the asylum! Just don't forget, if it ever gets too tough, there's always a place for you here."

The first line is so brilliant. I've always said that we are all mentally ill, in one way or another, because "mental illness" simply means you're not thinking right, and we all suffer from that malady--in spades (No Joker card pun intended). In this sense, for example, the "respectable good citizen" outside the asylum is just as "insane" as many of the people inside, because he or she is inappropriately prideful, self-sufficient, judgmental of others, or just plain ungrateful for the good things he or she has been given by God. In fact, any failure to recognize and worship the One who created us, whether accepted by society or not, is the epitome of mental illness (bad thinking) because we're living in a "matrix" world that has blinded us to the true source of good, hope, and help. We are living a lie, thinking like we are immortal, or able to sustain our own life, health, etc. or any number of other foolish notions. We are simply not the master of our fate or the captain of our soul, no matter how much we might tell ourselves that we are. 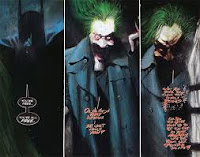 The second part of the Joker's line is interesting too. It implies that living in the "real world" is often harder than hiding in an institution, because in the latter you can admit your "mental illnesses" and relax while someone else takes care of you. I don't know if you've ever thought of doing that, but I have. And it makes me think of the words of Jesus, who said that we can find forgiveness, change, and refuge while remaining in the real world, but only through him. He said, "Come to me, all you who labor and are heavily burdened, and I will give you rest for your souls. Take my yoke upon you, and learn from Me, for I am gentle and humble in heart, and you will find rest for your souls. For My yoke is easy and My burden is light” (Matthew 11:28-30).
Posted by Dave Swavely at 8:04 AM