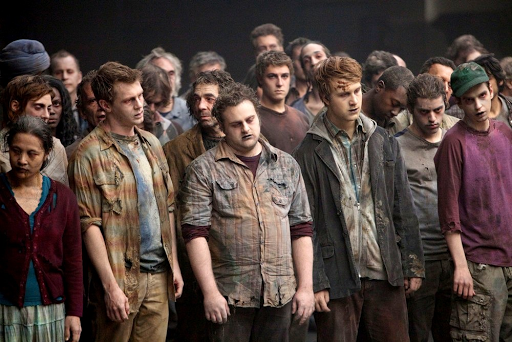 I've never been much for zombie movies; in fact, I can count on one hand those I've seen (and none of them completely): parts of the original Dawn of the Dead (turned it off after I started to get sick to my stomach from seeing people - though loosely defined, I know - eating the organs of other people); an edited version of 28 Days Later (because it was on sale and I was interested in the director and the post-apocalyptic London); the non-subtitled Korean version of Train to Busan (that's right - I didn't understand anything they were saying, but it wasn't hard to figure out what was going on); and now, just recently, I watched some of The Girl With All the Gifts (fast-forwarding a lot after the grossness started, just to see what would happen to the characters).

I guess I should add that I tried two episodes of The Walking Dead once (mostly out of curiosity, because there was so much buzz about it). I found the over-frequent gory deaths of the zombies disturbing to begin with, but then was really turned off when that kind of pornographic violence was perpetrated by "the good guys" on live humans as well.

I'm sure I'll lose many of you who like this kind of "entertainment" (if I haven't already) by saying that I don't understand the appeal of such over-the-top gore, unless it taps into some primeval feature of sinful human nature that doesn't exist in me (I have many vices, but that doesn't happen to be one of them...yet). I'd like to know how Christians can possibly justify watching that sort of thing over and over again, let alone enjoying it. But I'm only referring to the gory killing when I say that... while I was perusing The Girl With All the Gifts (which I do not recommend, by the way), I thought of another possible appeal of zombie movies that led me to some real-life reflections.

I think our interest is captured and adrenaline starts surging when the protagonists in these stories are up against seemingly insurmountable odds (something that other kinds of stories make good use of as well, of course - The Matrix and Lord of the Rings come to mind). The hordes of flesh-eating attackers are nearly impossible to escape, and even more to the point, the real human survivors are almost always a tiny minority compared to the walking dead.

This also may tap into a deep knowledge inside our hearts, because it actually happens in the real world of humanity (in the spiritual realm)! Do you realize that? Ephesians 2:1-3 describes the state of "the world" (meaning all the people who have not been "born again" by the Spirit, as Jesus says in John 3): "You were dead in the trespasses and sins in which you once walked, following the course of this world, following the prince of the power of the air, the spirit that is now at work in the sons of disobedience—among whom we all once lived in the passions of our flesh, carrying out the desires of the body and the mind, and were by nature children of wrath, like the rest of mankind."

God says that most of the people on this planet are dead yet walking around - the walking dead! Spiritual zombies. They are not in their right minds but under the control of something like a contagious fungus (as in The Girl With All the Gifts, or whatever other explanation might be offered) - or, in this case, someone: "the prince of the power of the air" (Satan and demons, who are very much like the machines and agents in The Matrix or Sauron and the Ring in Lord of the Rings). Like the zombies of lore, those who have not yet been spiritually awakened are dominated by their selfish desires and fleshly passions (much like a passion for flesh-eating) - more like animals than the way humans were meant to live (with a higher purpose and a heavenly mindset). In the real world, those who have been regenerated ("born again") are as different from others as the living humans are from the zombies in those made-up stories.

I remember noticing that sad dynamic in my father when I lived alone with him for a number of years while I was a teen (my parents were divorced). I had been spiritually awakened through learning the Bible at a Christian school, and so in my immature, halting way I wanted to know more about spiritual issues, talk about them, etc., but he had no such interest whatsoever. He just wanted to do his crosswords, drink his Manhattans, watch baseball, date his girlfriend, and play his horns on the weekend (he was a clarinet and sax pro). The difference between us was so obvious that I actually wondered at times if he was really human, because my human experience included an inescapable concern for God, or at least an inescapable knowledge that He was concerned for me. But nothing like that existed in my dad.

That spiritual deadness continued until the last few weeks of his life, when he found out that he was going to die from terminal lung cancer and asked me if I would teach him what I had learned about the Bible. As I did, I saw his spiritual eyes opening and his heart warming to the truth of the gospel. He said things that would have never come out of his lips before, like "I've wasted my life; I wish I would have lived for God instead of myself" and "I deserve to go to hell, and I know I can only be saved by the mercy of Christ who died for me." It was amazing to see this transformation, and I had no doubt that he had been made alive by the Spirit of God for the first time - a spiritual zombie changed into the kind of human that God had originally designed us to be, just in time to meet his Maker. (Kind of like what happens in Warm Bodies, a zombie movie I forgot to mention that was very different from the others, though I still did feel queasy during some parts.)

Notice that Ephesians 2 also mentions "this world" and "the rest of mankind." There you have, in reference to the reality we live in, the additional dynamic where some of us "survivors" (those "still living") are a small minority compared to the waves of spiritually dead people surrounding us. In fact, such spiritual zombies control most of the institutions in "this world," from government to business to entertainment and so on. So we have to band together and somehow stand against all the forces that are trying to destroy us spiritually in this post-apocalyptic setting (post-Fall, that is: the Fall was a world-ruining apocalypse if there ever was one).

For all of you who have been exposed to zombie stories (and any of you who like them, if you're still with me), perhaps seeing the parallels between the imagined world of those stories and the real world we live in will motivate you to be a hero who is willing to be different and fight against the tide of unbiblical influences and ideas that attack us. They are so prevalent that they can seem to be right, but are really just a product of a world that has been ruined and minds that are enslaved to selfish desires, which feel good at the moment of satisfaction but in the end turn out to be merely myopic and destructive. 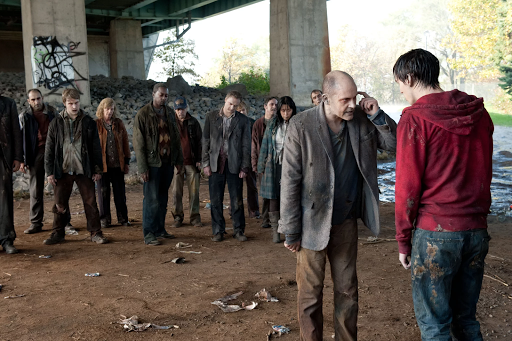